Not only did he remember, he emailed the full name of what the pet library morphed into over the years: The Sulphur Creek Nature Center.

He’s backpacking in the Sierra Nevada Mountain range right now.  He probably has other things on his mind. (Or he’s hunting for tarantulas.) With a memory like that, it makes me wonder how many piggy banks he might have broken.

Drum roll: they still have a pet lending library. Seriously.

I’m in shock. Do their hamsters still change color as they get older?

If you click on the link, scroll down to “Animal Lending Library” for a full list of available animals.

I suspect they have an abundance of safeguards in place that didn’t exist when we were kids. It looks like a very comprehensive program.

It’s a good world that has a animal lending library…

The 1960’s were a time in which, if something could be imagined, it could be done.

What we didn’t know then: some things are better left in the imagination stage.

My mother is not an animal person. She’s never had a bond with an animal. Not her fault, just the way she is wired and was brought up. Maybe she never met the right animal. My dad was an animal person. Unfortunately, it was a matriarchal household.

I do give my mom a lot of credit.  Despite her fear or dislike of certain animals, she thought it would be good if we kids grew up unafraid of animals. She stuck with things that could be contained in a tank.

“Jane”, my mom would say with fake cheer, “how about some nice guppies?”

Any ten-year-old who is still playing the I Want A Pony tape is going to be stumped by a come back of “guppies”.  It made me wonder about my mother’s sanity. Who comes back with “guppy” in a negotiation about ponies?

Guppy = dirty fish tank that stinks. Plus, they are suicidal. (I eventually gave in on the guppies, so when they didn’t work out, I’d have pony leverage.)

What is wrong with her?

My brothers had turtles in a tank. I suspect my mom was slightly masochistic.  She also let them have snakes, as long as the tanks were outside.

One day, after a particularly grouchy I Need A Pony fight, my mom said: “why can’t you be happy with fish?”

I replied, “I want something warm-blooded, that you can hold. Like a mammal.”

She was stunned that I knew what a mammal was, and felt she should reward this somehow. She checked with her friends.  Maybe I could “borrow” someone’s hamster for a week.  That’s how she found out about the pet library.

Apparently some groovy nature-loving hippie thought it would be a great idea if kids could check animals out for a couple of weeks.  Just like a book library!  You went in, got a card, and began checking out animals. That way, you could see if you liked guinea pigs before you bought one, therefore potentially saving a life.

Parents, in those days, often took Rover out to a nice home at a farm, where he had lots of room to roam.  A farm that we never managed to visit.

Armed with my new Pet Library card, accompanied by my reluctant mother, we hit the Pet Library.

I think: Ooooooooo….rats!  Aren’t they cute?  Look at those twitchy whiskers!

I look at my mom.

“Plague” is written on her forehead in black Gothic letters. I keep my mouth shut. No rats.

There’s a tiny, golden brown hamster sitting on its haunches, itty-bitty hands up by his mouth, cheeks bulging, stuffing himself with food. 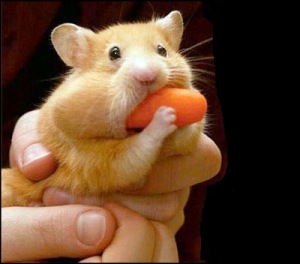 Involuntarily, my mom says “He looks like that cartoon.”

Jane sees big, flashing, red arrow pointing down at golden hamster. “That’s the one I want to check out, mom!”, I say with as much excitement as possible.  “How did you  know?!”

Her face falls. She studies the hamster closely.  I see an Ixnay forming on the horizon. Drat. The librarian walks up. “Isn’t he adorable?”, she says. “That’s Howard.”

“Do you have anything smaller?”, my mom asks.

That’s when I know Howard is coming home with us.  The only mammal smaller than Howard is a mouse. If rats = Bubonic Plague, mice = Polio, minimum.

An hour later, after a lot of imploring by mom to check out the cute little lizard in a tank, we walk out with Howard The Promised Mammal Hamster, in his cage, with a bag of food, and list of care instructions.

I eye the rabbit on the way out the door.  If I take exemplary care of Howard, maybe my mom will cave in on a cute little Easter bunny? Eventually?

I sit on my hands the entire return drive, so I will not reach into the back seat, and remove Howard from his cage.

I think the fight is over.