I learned a lot, standing in my barbed wire corner and watching.  The riders had to herd the cattle through a lot of open acreage, then through two narrow (for a herd) gates, after which the land opened up into major open acreage again, just when they needed the  herd to go left.

The first rider brought in a smaller clump of cattle through the first gate, began to push them through the second, then went ahead of them to keep them from veering out into the open acreage again.  I mentally dubbed her the Point person.  (I have no idea what this is in cattle speak. Bella, Kimber…anyone…does this job have a name?)  After turning her cows towards the pens, she came back and took up a position to block cattle from the sea of open land, and push them off to the left.  It was a wait. 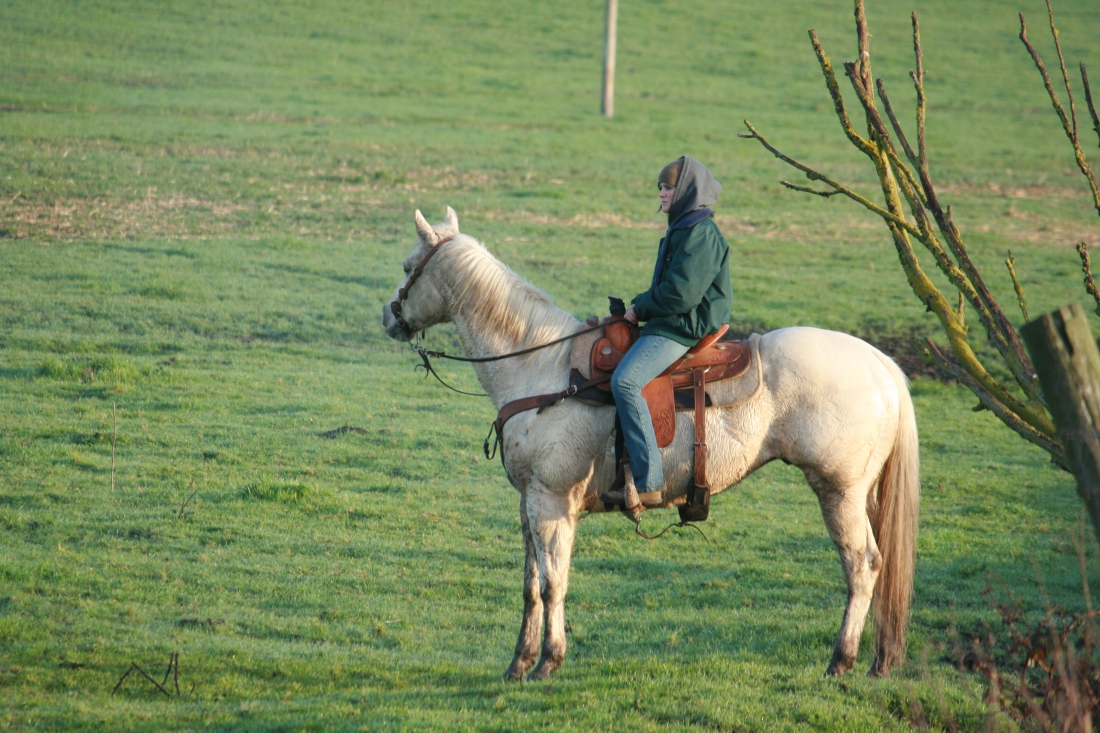 Imagine being the person relied upon to quietly turn a hundred cows or so, after they’re pushed through the gates.  Sure, help would be handy…as soon as a rider could get through the rest of the herd without spooking them!

The idea is to walk the cows in quietly, both for their sakes and yours. I’m guessing (despite what we see on TV) dealing with a herd of panicked, running cows would be incredibly difficult.  I often saw the riders stop, quietly reposition their bubbles of space, wait, check everyone else’s position, and then start walking again.

To get a sense of how aware cattle are, and how easily they can be spooked: 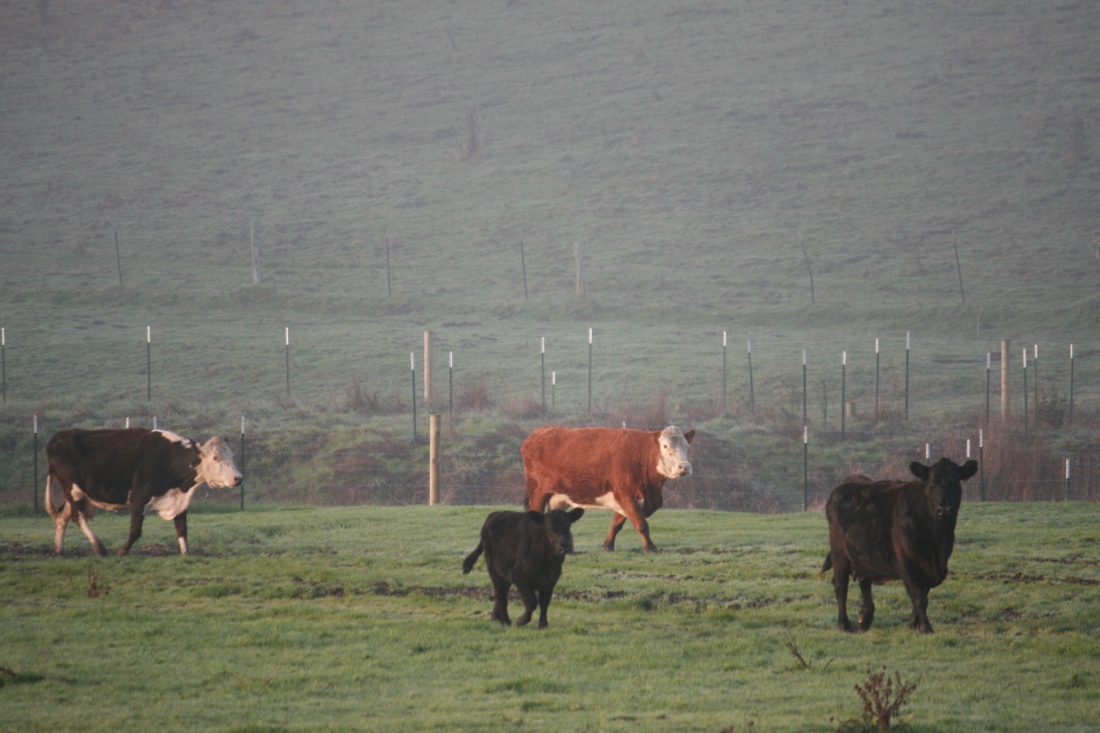 These cows were part of the first group coming through gate 1. I was quite far away, using a zoom lens.  Time to move to position #2.  Stopping cows is bad.  Slowly, quietly, I turn my back, pick my way up the hill through gate 2, and move into a far corner, using the point rider as cover.  The minute I stopped looking at them, they started moving forward again. Given the choice, horse and rider is what the cows will register, not person way back against fence post with one giant eye.

With cattle penned, the men on the ground waited while the women determined how they were going to bring in the next bunch from a different field.  It was a kindness.  Cows will be quieter, and easier to sort when the horses are gone.  Mothers and calves had to be separated for vaccinations, etc. Trying to vaccinate a calf with protective mamma cow standing over you? Bad idea. 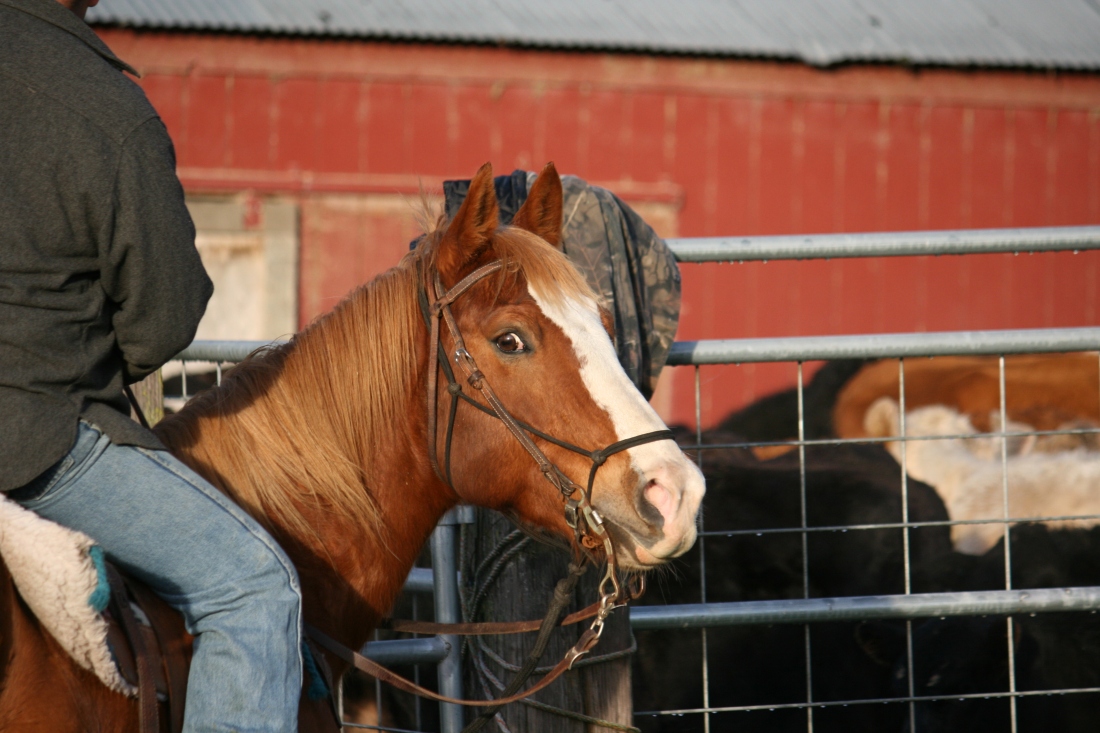 It was a sea of bellowing cattle. 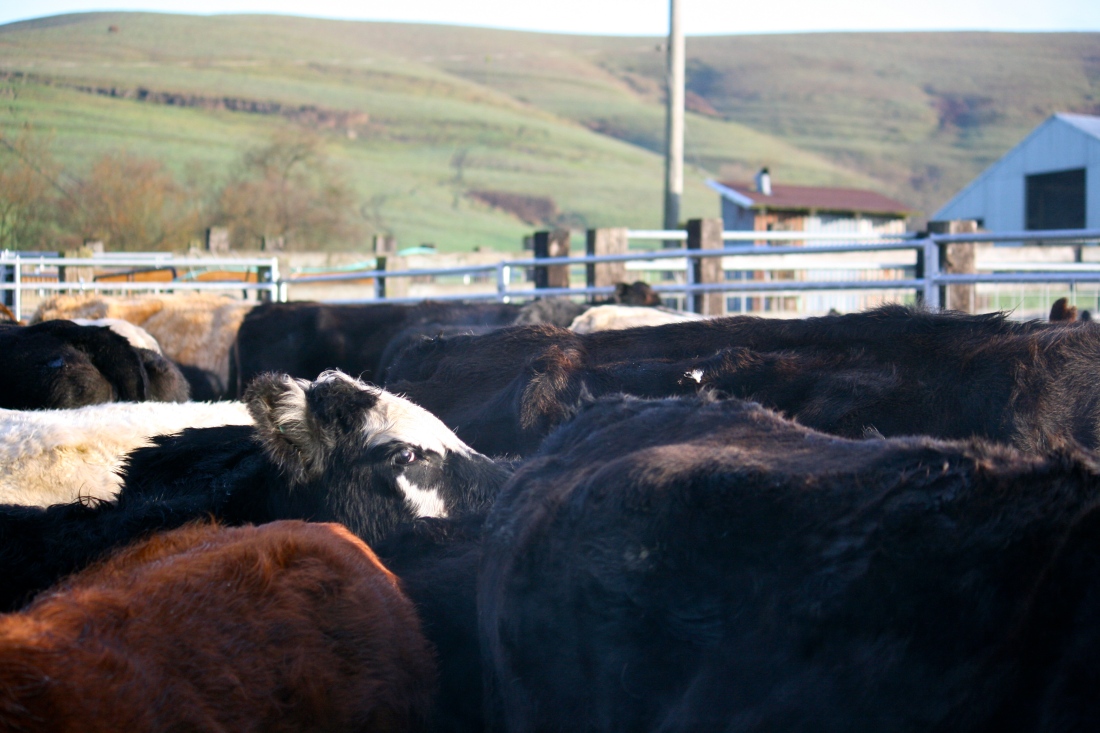 Kimber gave directions, and the riders headed out again, this time to the hills directly behind the cattle in this photo. (Note the silver barn, it’s going to come up again.) Can you make out the heart? Hudson: the horse 3rd in from the right, the one refusing to walk. 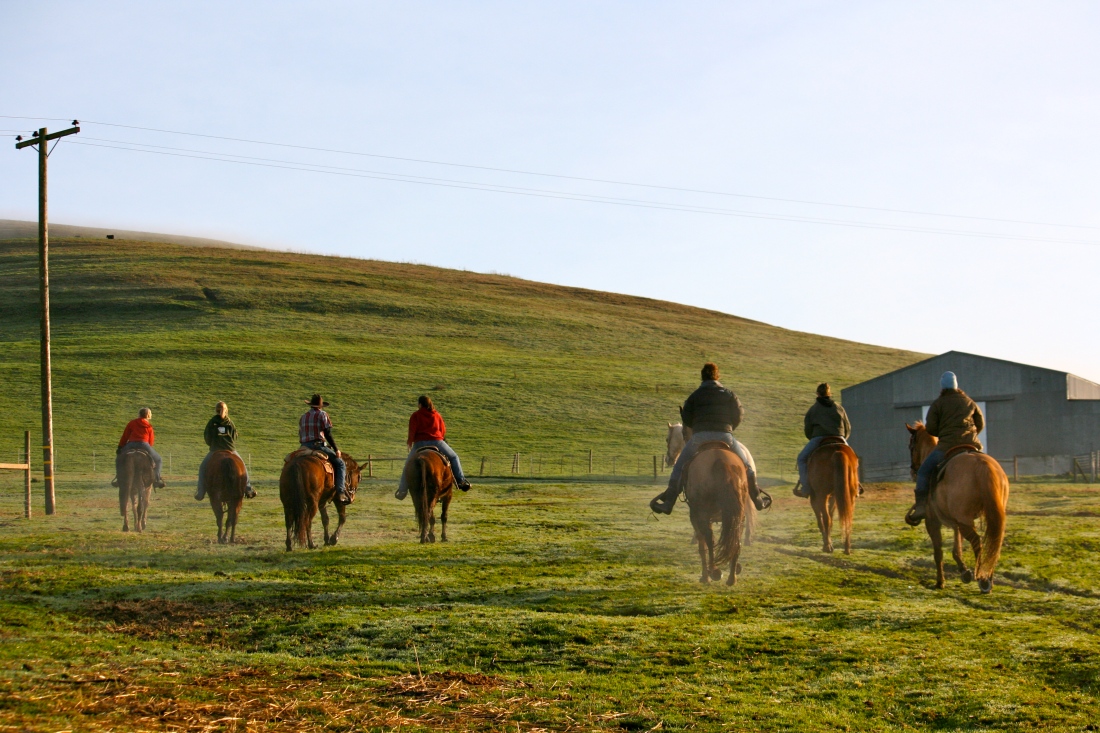 I was glum.  To get a good shot of the cattle, I had cut through an empty pen to the other side, taken my shots, then looked up to discover the pen filling up with unhappy mamma cows, as the men slowly and quietly sorted them away from their babies.

If I slipped through the fence to the right, I might spook the upset cows. I walked around the barn to check my chances on the left: empty pens and open field, but some cattle were wandering in on their own.  I met the ranch owner on that side, he was working the gate that would hold the next group.  He was protective of the greenhorn (me): when we were done chatting, he suggested I wait where I’d been.

To reassure him I wasn’t that green, I modeled my field skills on the way back: I promptly stepped in a hole, falling face first in the mud. Can I die now? A nice man, he left the gate, helped me up, and didn’t laugh.  Straight faced, he suggested that if I didn’t feel like waiting at the pen, I might want to wait by the picnic tables instead.  I had no idea where they were, but I suspected the answer would be: not near us.

I was thinking of going on a cattle drive?  Oh the shame.

I wiped the mud off my face with my cap, and rubbed mud off my hands on my jeans: good to go.  I don’t have a lot of practical qualities, but stubbornness is one of them.

As I watched the men sort the cows, I was profoundly awed by their gentleness.  They carried hollow plastic paddles, filled with plastic beads, that reminded me of Cricket bats. They moved slowly and carefully in the pen, lightly rotating the bat to make a quiet rattle. Most cows moved away.  Occasionally, they’d lay a bat against the side or flank of a cow to get them to move off.  No drama, no hitting, a lot of care. 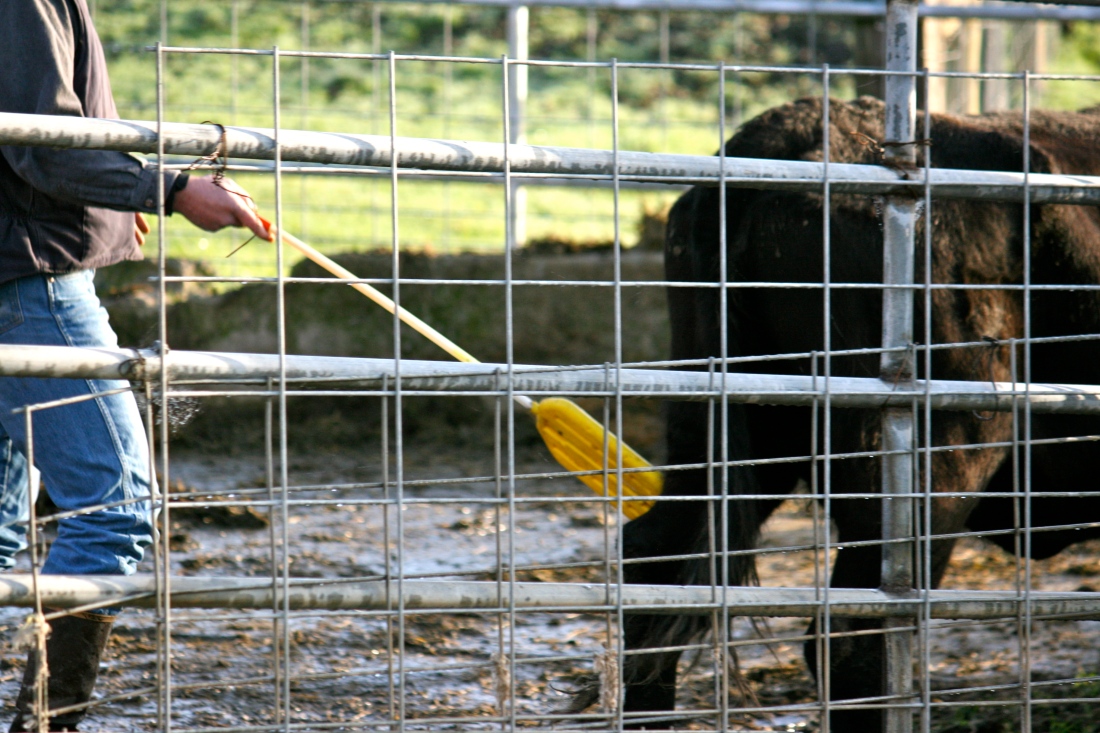 The gate handler was amazing.  It’s an art to get the gate open and closed quietly, separating mom and baby, or letting a steer through.  One white cow in particular was difficult. She was the only one with horns, and she was very aware of the status they gave her. She had an extremely young calf, who was quite frightened. 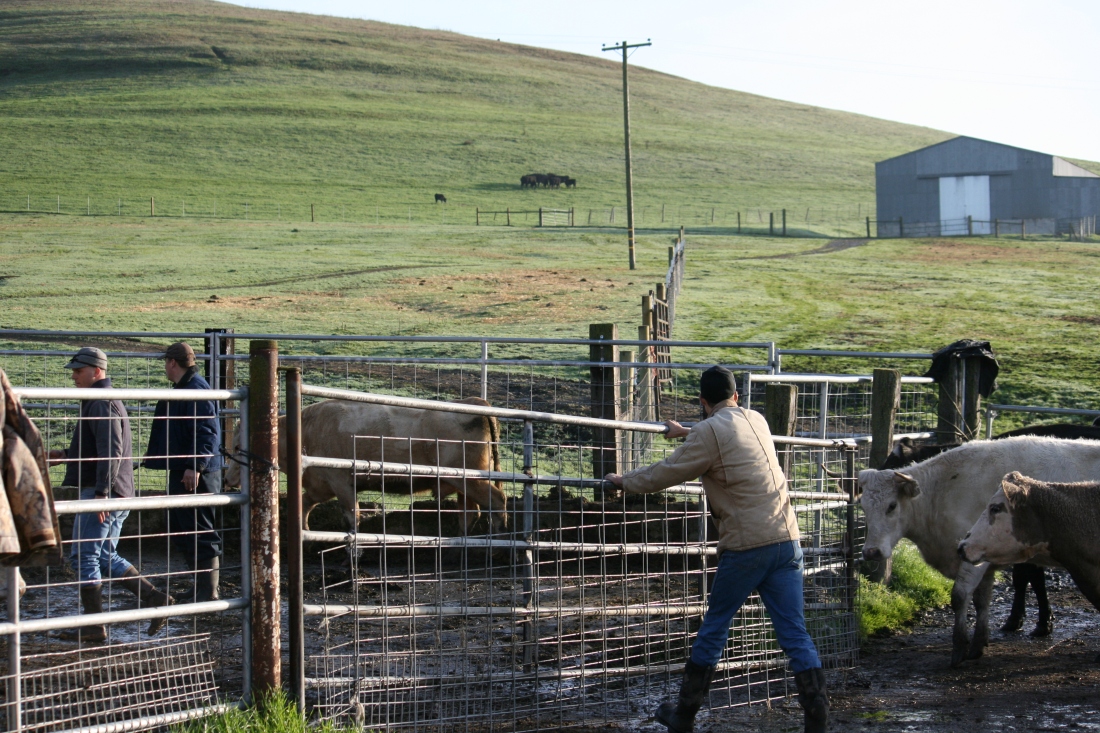 The following touched me deeply.  Her calf was starting to panic, when one of the big strapping guys reached down and placed a hand on its shoulders, calming it. 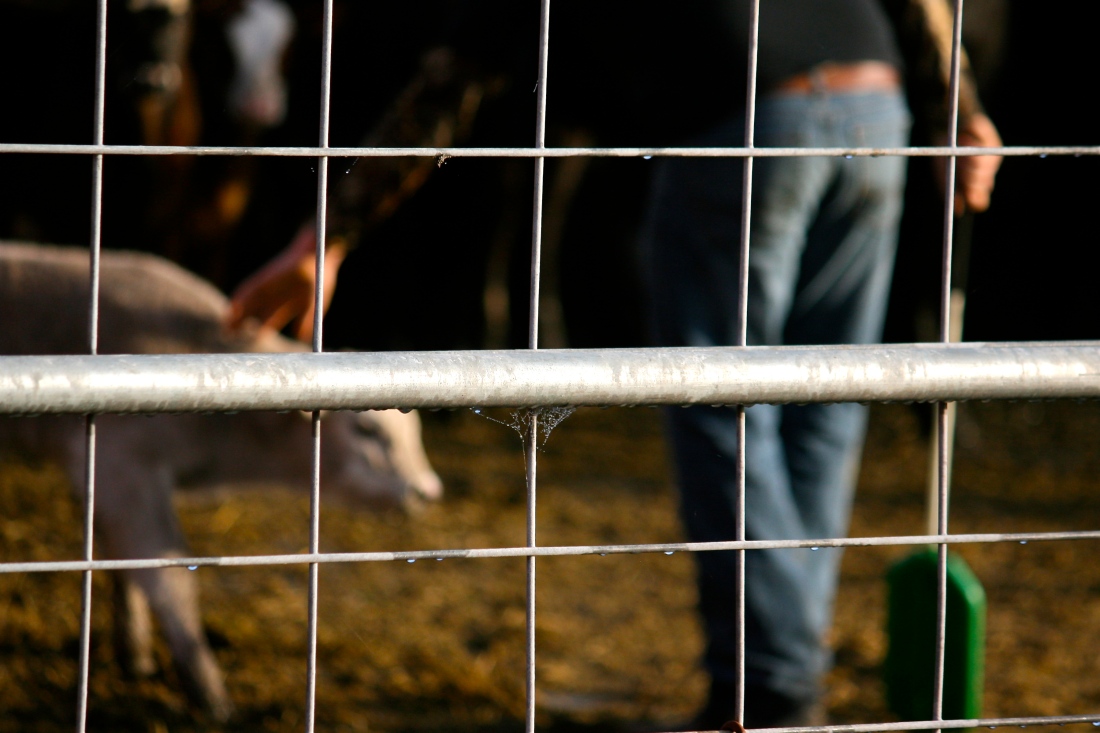 When it came time to move the calves into another pen for vaccinations, the man said: leave this one, we’ll do it here. Mom and baby stayed close. 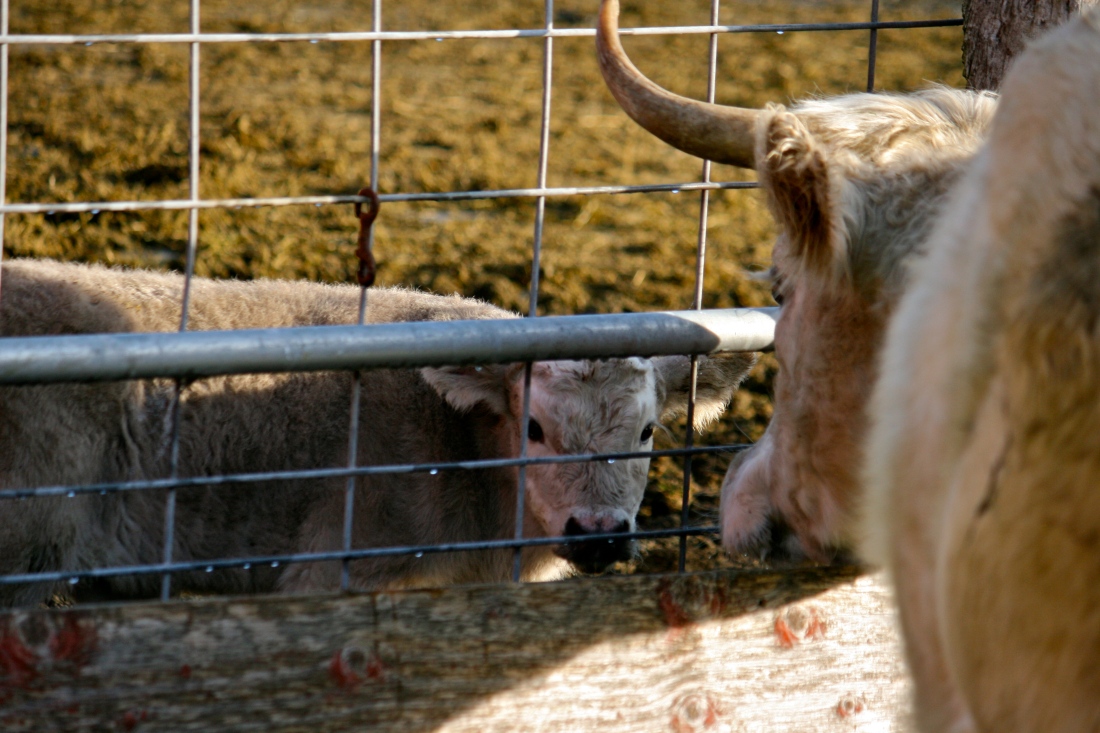 I love cows.  I find their faces beautiful. 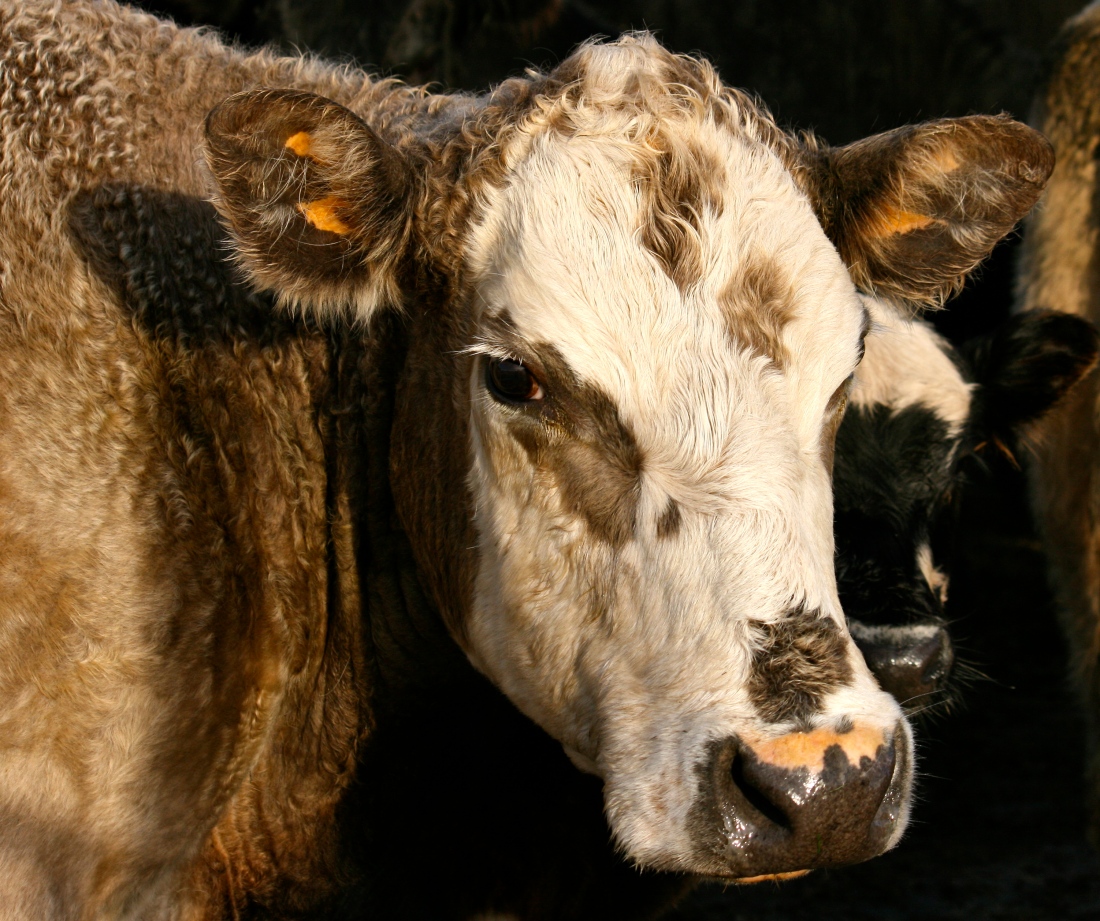 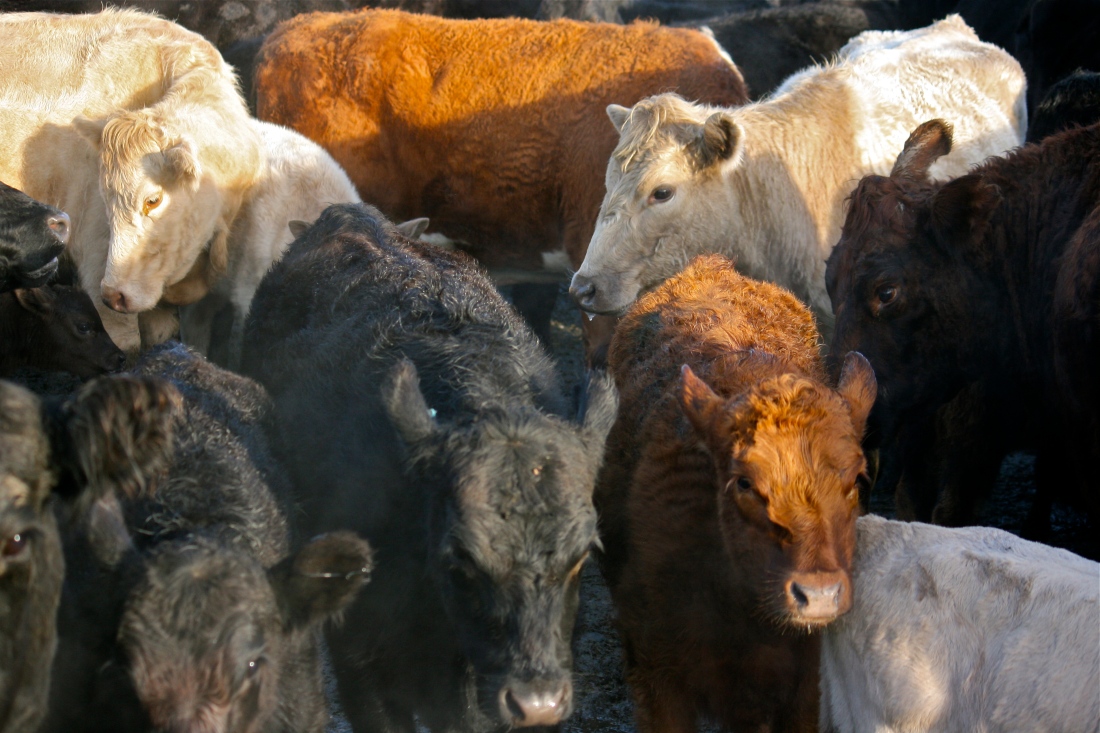 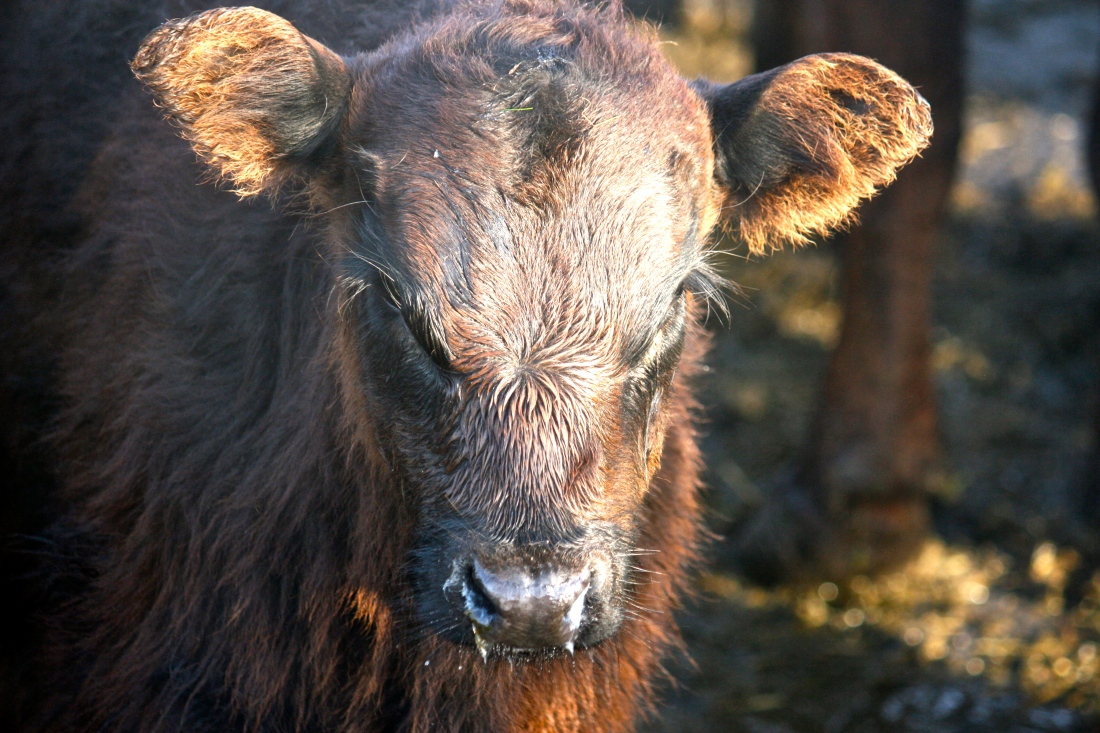 I hear shouts and look up.  Riders starting to bring in second group.  And we get this incredibly silly, fun shot: 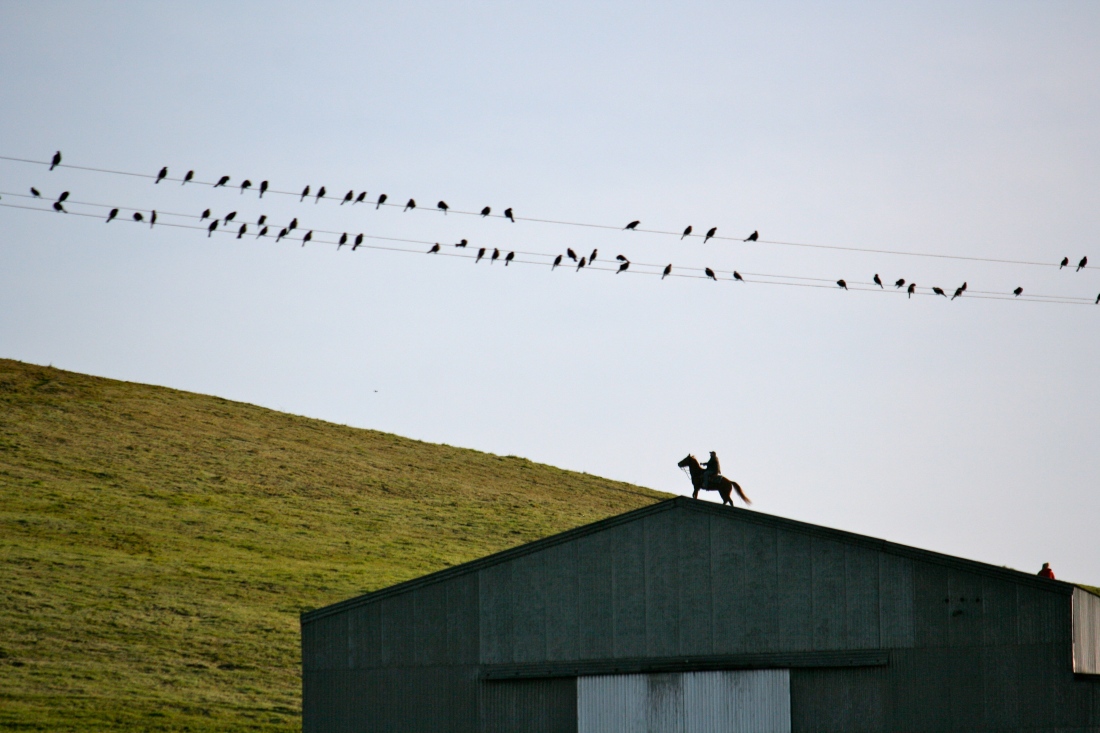 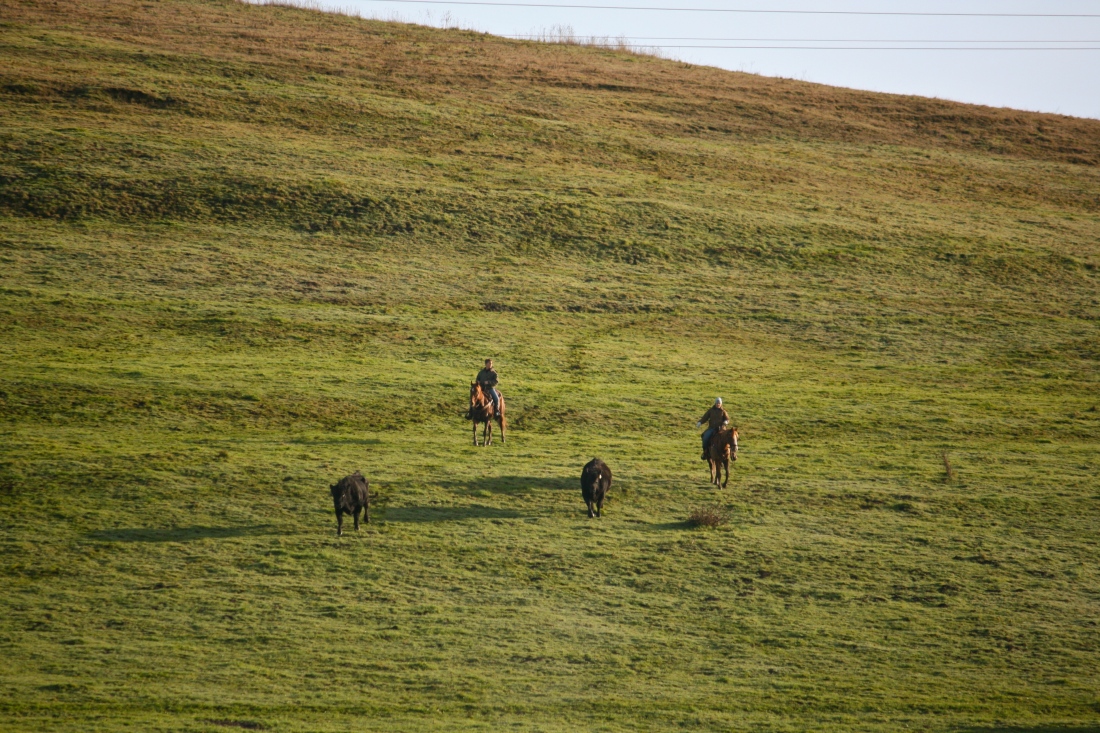 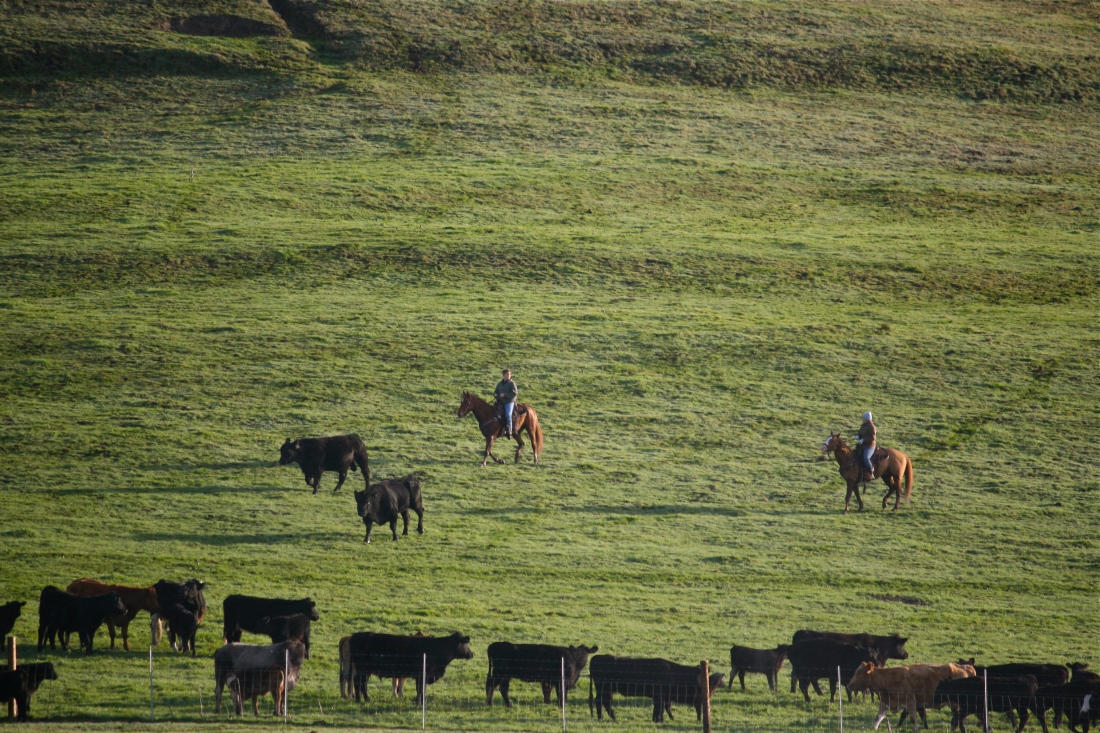 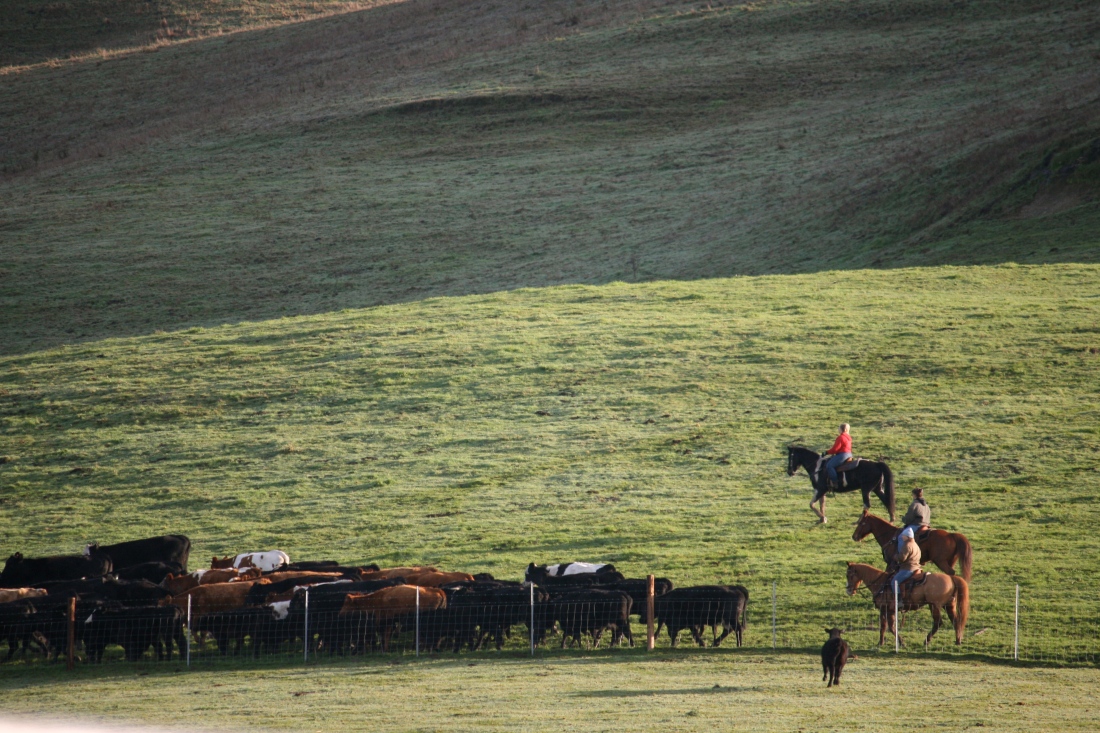 Back at the pens, Kimber goes over plans for the next foray.  I’m not close enough to hear. Something’s not right. 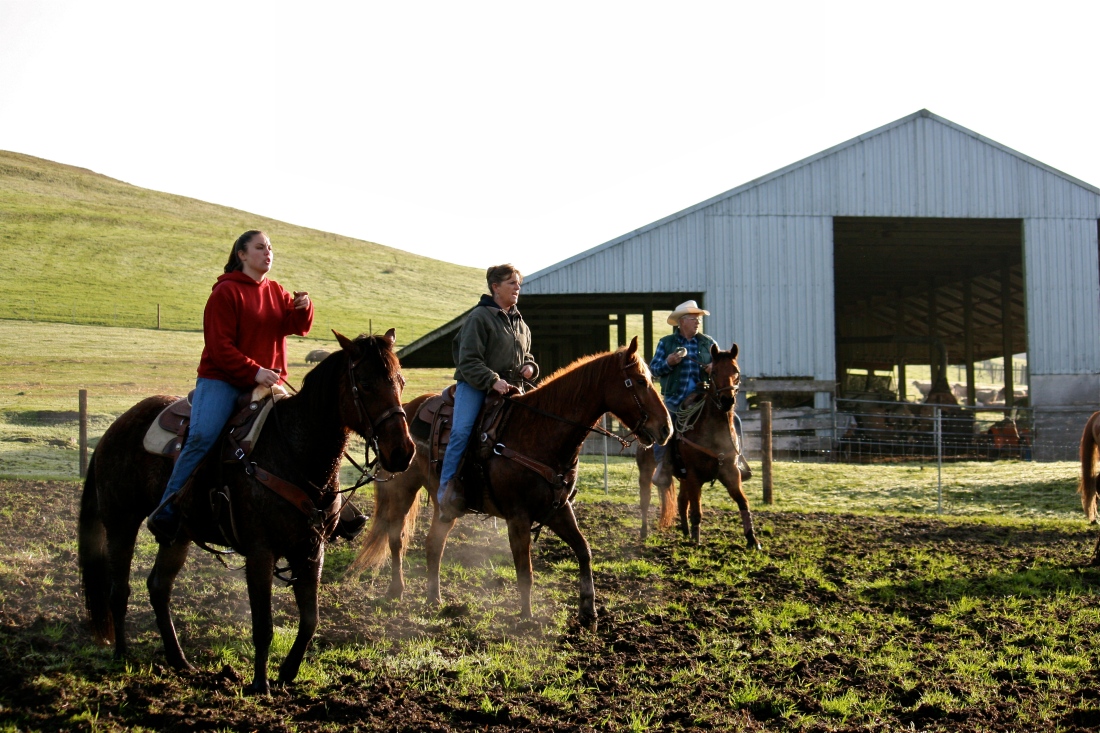 She’s off to fix a problem: 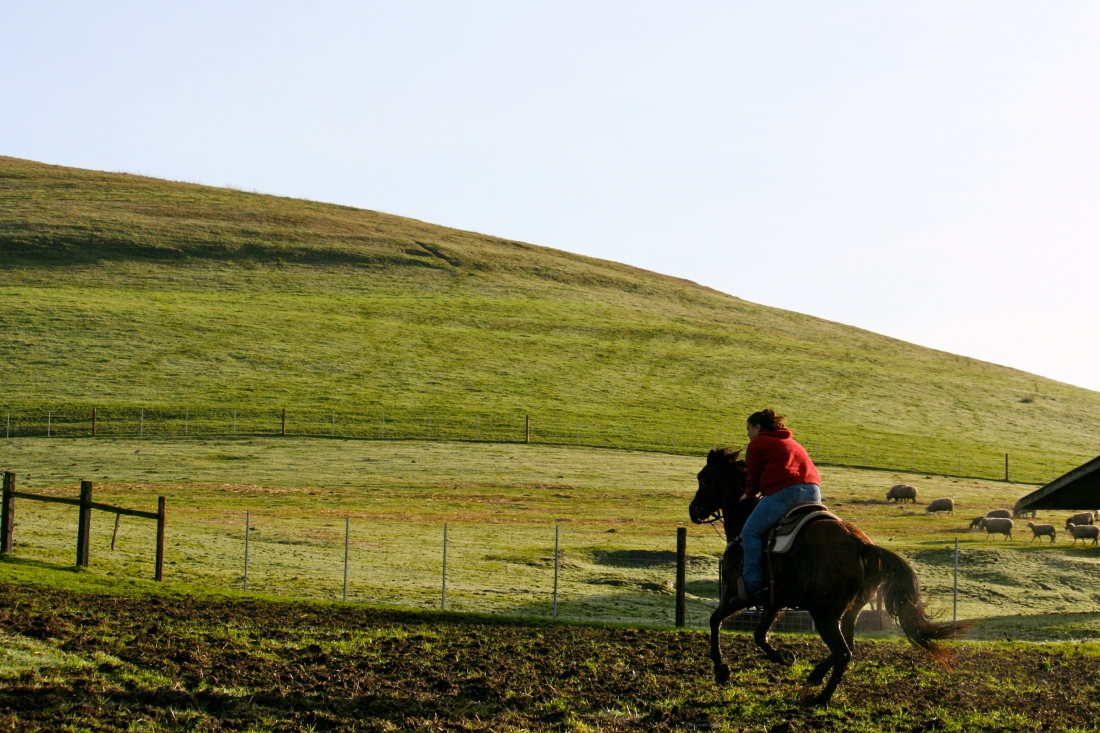 The end for me, the beginning of another round-up for the riders.  I go home happy: as tired as if I’d done something besides push a button, muddy, thirsty, and thoroughly impressed.

I now have some working knowledge of a cattle drive.  It’s a lot harder than it sounds. You have to be fit and willing to work.  It’s not a trail ride with a few cows thrown in for local color. I think I’d be useless, but I take direction well.  Maybe next time I’ll be able to ride!

15 thoughts on “In Which We Witness Stewardship, and Riders Move Out”